By clickling the X or staying on the site, you accept the cookies required for the site to function properly.
Home > Gold Rates > Philharmonic 1 Ounce (Austria)
Create alert How it works
Product added to your cart
The amount you can order online is limited to 60 000 €.
Checkout Continue browsing 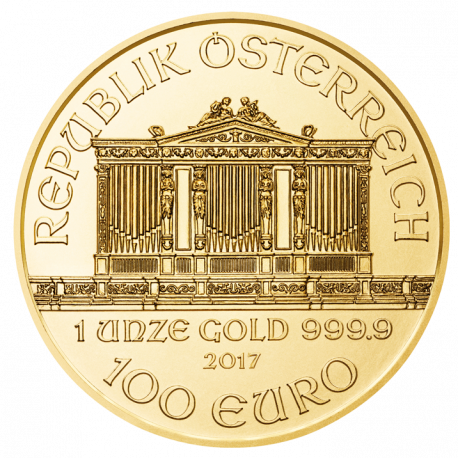 The Vienna Philharmonic is an investment coin  of one ounce pure gold. It is stroken annually by La Monnaie d'Autriche in Vienna. The first coin was made in 1989 and as such was the  first European investment gold coin.

It exists in different formats:

The obverse of the coin takes up a representation of the Vienna State Opera (Musikverein) where the Vienna Philharmonic Orchestra performs. The obverse resumes the nominal value (Euro or Schillings) of the coin as well as its fineness (999.9) and its weight "Unze" (ounce in German).

The inscription "Republik Osterreich" is present above the Grand Opera.