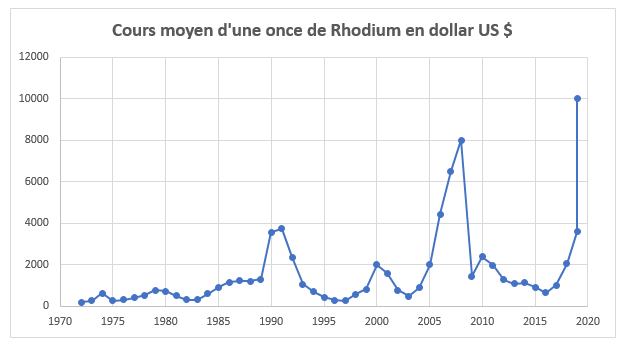 This little-known metal is now in the spotlight.

Indeed, its price reached the value of € 52,500 per 5 ounce bar of Rhodium produced by Baird and co.

The reasons for this increase are multiple, according to analysts:

The rarity of the metal (the rarest in the world)

Rhodium does not exist as such in nature. It is a residual metal that results from the refining of platinum and palladium. Therefore, this metal is difficult to find in large quantities.

Increasing demand in the automotive market

Rhodium is used in conjunction with platinum and palladium to reduce the consuption of exhaust gases. The catalytic converters uses between 80% and 90% of its total use. Even if hybrid and electric cars are on the rise, vehicles running on hydrocarbons are still in the majority.

As you can see in the graph below, the price of rhodium is at an all-time high. The last time it hit a similar high was in 2008 when it reached $ 8,000 an ounce.